How to put yourself out of business 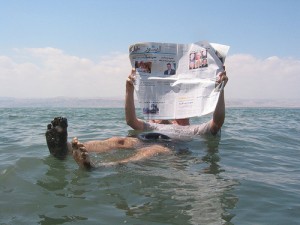 I picked up this story through Twitter last night:

Posting a link to a news story from Ireland might prove to be an expensive business.

According to this site (hat tip Fark) a group of Irish newspapers have decided that the way to make cash from the web is to bill anyone who links to one of their stories.

The National Newspapers of Ireland group has adopted a new licensing scheme where it expects websites to pay to link to one of its members….

And it goes on from there. Unsurprisingly, there is so many things wrong with this idea it’s quite hysterical. And tragic, for an industry already in trouble. Basically, the idea is that these Irish newspapers have already clamped down successfully on anyone daring to excerpt any amount from their articles with the link (like Google News… bye bye fair use) and are now targeting the very act of linking to an article at all. Claiming this is somehow copyright infringement.

My goodness. Sounds self-defeating, positively inane, and completely geared towards making yourself irrelevant, right? Well, I decided to look into this further and hunted down the group’s website, and found this post from them on the topic (oh, a link, hope that doesn’t get me in trouble!).

Basically, the piece refutes the idea they are randomly demanding money from sites that link to them, but they do declare they are doing so from any “commercial site”, but not “personal” sites. Of course, the first problem is they refuse to explain what they deem to be commercial and personal. Those definitions will vary quite a bit depending on who you ask.

The Internet will break them much sooner, believe me.

As many instances have shown, removing yourself from search engines and banning people from linking to you (or demanding money for it) will cut off your site, cut off your revenue and lead to your quick demise. And as a counter-argument, you have to wonder if these newspapers plan to link to any other site ever, and whether they think they should pay other sites for the privilege?

These guys really, truly, want to go out of business. Media is going online, one way or another — no one is changing that now. And smart media outlets work with the medium rather than trying to break it.

For all their missteps, I really hope Australian newspapers do not feel they need to copy any of these ideas.