Crazy arguments on the Internet 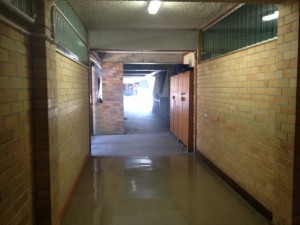 The empty school corridor… not a bad thing, and not at all like the empty arguments online…

Back at work today for the first time since before Christmas, and it’s quiet, naturally. Seen a couple of people, but as I expected, I’m basically the only person here for most of the day.

And of course, while I’m getting back in the swing of things and getting into some work projects (finishing a certain TAFE course is the main thing right now), I’m also just doing some assorted reading. And that’s when I hit the land of crazy Internet arguments…

I’ve often noticed in the past that for any given topic, no matter what the prevalent view, you will always find the contrary argument somewhere online. This is not a bad thing in and of itself, although try that with a few rather extreme perspectives.

While it won’t seem like it to some, the extreme views on US gun control have been popping up online, sometimes in major outlets (the farcical “kids should rush the gun man” being one), and seem to just confirm how detached from reality some Americans seem to be. But of course, there are far more intelligent pieces from other Americans as well. Particularly noteworthy is David Simon’s writings on this topic just before Christmas, on the horrors at Sandy Hook. What I find particularly amazing for both such a high profile figure, and different to even newspaper opinion columns, is his willingness to engage with the comments and respond regularly to the points of view in the comments section (sometimes with vehement disagreement as well!) Of course, he kind of delights in the comebacks, but it still makes him different to most media figures online. Some of my favourite authors regularly engage with their commenters as well (such as John Scalzi and Charles Stross) and it produces a better standard of comments as a result.

It’s entirely this lack of return engagement that usually makes most news media comments sections turn into such cesspools of stupidity. I usually find the more mainstream and media outlet the less intelligent the comments will be, but maybe it’s the lack of engaged authorship or consistent moderation on the comments that produces this issue.

Argument online produces all the extremes humanly imaginable, but to “leave them to it” as most sites seem keen on, and to not engage a standard of moderation that goes beyond simple defamation and obscenity laws usually produces a comments section that you don’t want to read!