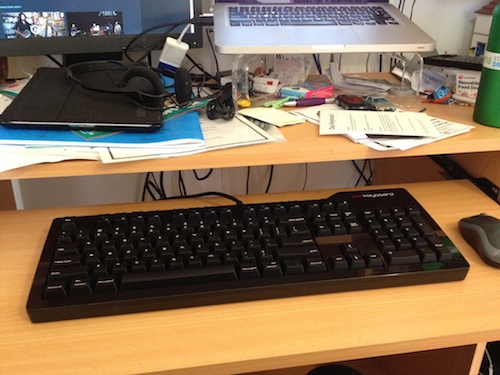 In my continuing and ongoing quest to find a way to write more and better I’ve hit upon a new yet old method. And so far it’s working, rather well in fact.

However, this time it seems workable, not nearly as complicated as I thought.

Just go to be earlier… certainly no later than 11pm, maybe 10.30pm if I’m organised, and get up at 6am. Be writing by 6.45am and I’ve usually hit my goals by 7.30pm. Just add morning coffee to the process, and my new Das Keyboard is certainly helping the flow.

All fairly simple, really. This time though I have another component. Undersell your word count. I’ve started aiming for 500 words per session only. It’s a workable amount, and one I was hitting straight away. It helps that I use Scrivener as well, and have the Project Target tool.

Except a funny thing started to happen. About a week after I resolved to hit this target, I started regularly going well over it. Sometimes up to about 750 words, but just as often up to 1100-1200 words. I think that the psychology of aiming for a low target, then hitting it easily enough, made sure that I started going well past it not long later.

The trick now is going to be maintaining this for months. Or permanently. Either way, I finish this project then do the next one. The consistency over time is the only thing I’m missing now.

I am happy with this routine — try it yourself 🙂

Published in writing and Youth Bytes