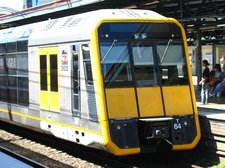 The train trips seem longer than normal at the moment, with the weather really weird and variable. Last week it was over 30 degrees on one day, and now it’s back to winter, at barely 10 degrees in the morning, and apparently no more than 16 for the day.

And the worst thing in the last two days seems to be the return of illness. Not mine thankfully, at least not yet, but for the last two days I’ve been sitting on the train in the same carriage and had exactly the same woman sitting in the same seat hacking away with a terrible cough for 40 minutes. It’s a bad scene, with this really noticeable carry-on effect where plenty of other people start coughing, me included, if only slightly.

Damn I was really mentally wishing some harm on this lady. I really wanted to say something, but she wasn’t that close to me, and proprietry got the better of me. Just didn’t seem much point, though it’s a wonder the people directly opposite her didn’t say something. I’d hate to have been sitting next to her and dealing with that.

It makes me wonder really… is she just going to work and coughing all over her colleagues the whole day? People seemed to think better and stay home back in winter, back in the main swine flu panic, but now that’s somewhat subsided and it’s mid-spring (albeit unseasonably cold), people probably aren’t paying the same attention.

I’ve had a really good winter health-wise, not taking a sick day since March I think, so I’d hate to see that streak broken. The flu shot I got really seemed to have the desired effect, so I hope that sticks. People at work are getting sick now as well, so it might be a late season shock for people.

Then I’ll start getting annoyed about the length of the train ride again… and so on. At least I’m getting some new blogs up; school holidays seems to give me a seat more often. Got to find that writing time of course…

Published in health and rant