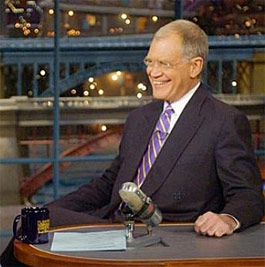 As a semi-regular Letterman viewer (thanks to Channel Ten here), it’s been an odd one reading about this whole Letterman/affairs/blackmail saga. Missed last week’s initial revelations due to it not being on until 1am, but checked out part two last night, and it was odd. Interesting but odd.

So he had some affairs. Not a newsflash really, as he does kind of seem the type, especially since he was unmarried for decades, and that only changed earlier this year. I presume these affairs ceased before his marriage, but even then it isn’t much of our business if they didn’t, but it would make sense. While his girlfriend and now wife was with him for 20 years, we don’t really know the situation of their relationship, or the stability. Totally between them of course. I can easily imagine though that a condition of their marriage might have been that such things ended. which again would make sense.

But then the blackmail thing, and the remarkably public way he’s handled it… well that was unexpected. On the one hand he’s such a public figure, but on the other hand he has been fairly private for such a well known name. Masterful media relations really, as being upfront about it has probably lessened or removed anby damage to him, which is smart. And he’s keeping the women out of it as much as possible, while really letting the accused blackmailer have it. I’ve already read the suggestion that it’s an uneven playing field, that Letterman can put his side out there every night while the accused can only do it in court, but really, who did this guy think he was up against? I’d say this is par for the course if you try and blackmail a major celebrity, something that seems like a fairly zero sum game to begin with anyway.

As for the fallout, well it’s already been asked iif Letterman risks hypocrasy over this, with so much of his humour being about other people’s infidelity. But really, he never condemned, just made jokes, and it’s clear he expects the same in return. All the other talkshows are on him now, and his routine last night was good, where he mocked going for Clinton, Spitzer and Sanford jokes and realised going there was pointless now.

Letterman’s schtick has always been heavily based on self mocking, so that skill will seriously help him now, and I wouldn’t expect that to change. He’s endless self-depricating, and will continue to be. As long as anything he did never involved any kind of coersion or other kind of boss-employee manipulation, I think people will let this slide, just as anyone sane did with Bill Clinton. All Letterman should get in return is good humoured mockery, and he’s already got a jump on us by laying plenty of that on himself.

Published in news, television and writing