It’s a couple of days later now and it already feels kind of unreal. I don’t get to see a huge amount of concerts now, and while the memory isn’t fading, somehow the effect is. That’s more a testament to how great the concert was than anything else, but it makes trying to write in detail about it afterwards somehow less valuable.

It was a great show, as I knew it would be. There was a mix of old and new songs, with no lack of importance being placed on the new stuff. Tracks like “American Land” and “Death to my Hometown” worked so well with the large band on-stage, and the best classics were just classic. The encore that started with “Thunder Road” and “Born to Run” were the highlights there.

There were more musicians onstage than anything I’d ever seen barring an orchestra, and it worked so well. Seventeen including Bruce — up to three guitars, two keyboards, drums, percussion, five-piece horn section and three backing singers — just an amazing layer after layer of sound. The guest inclusion of Tom Morello (from Rage Against the Machine), subbing for Steve Van Zandt was surprising, but it worked so well and lent itself to one of the other highlights of the night as he and Bruce essentially duetted on “The Ghost of Tom Joad”.

And the other surprise was the stage-diving! Springsteen is 63, but he had the energy of someone half his age, diving into the audience at least twice, and being carried back to the stage early in the show. Everything you hear about the guy tells you he is a total professional, dedicated to training, to rehearsal, to putting on the best show he can, and it all comes out there on the stage. But there’s nothing mechanical about it either — he puts in all the effort to produce a show full of heart and soul and musical fun.

I snapped some pics and even took some video (for the sound more than anything else), and I’ll post that up here soon enough, but again, it can’t really do the show itself justice. I was sitting quite high and quite far back, but still had such a great experience. 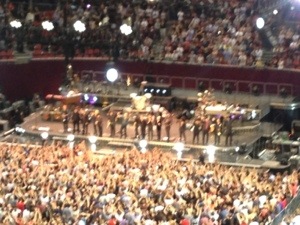 Published in music, review and writing