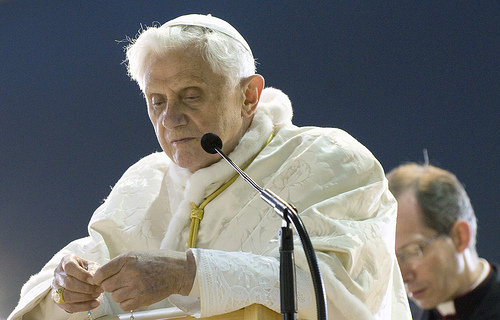 Well I guess this was surprising, given the way the job usually goes:

Not enormously interesting in a direct or personal sense, but it is history-making, and really, what a history! There really isn’t much else in the world with a direct 2000+ years worth of history to draw on. When you can say the last guy to resign in similar circumstances did so in 1294, you’re talking some background history!

I’ve never found religious institutions particularly enlightening (the fence-sitting agnostic, that’s me), but I’ve always found the history of religions fascinating. The Catholic Church, and the Papacy, in particular, is a sometimes remarkable, sometimes bizarre organisation loaded with all kinds of historical quirks. Check out some of the current news items — all kinds of weirdness with previous papal resignations.

So now they do the “who will be the next Pope” thing. And interestingly, bookies have declared a three-way race for the title, with two of the candidates being African and the other Canadian. Any of them would be a historical choice, as I’m sure there’s never been a North American Pope, and of course, there’s never been an African Pope.

Anyway, it’s all very intriguing, even when the religious aspects are of no concern to you. Will keep reading about the developments with interest.

Published in lookback and news