Blogging and writing in 2013

A new year seems like a chance for new things, new changes and new plans of creative attack. So I’ll say it up front to start the year: I will be aiming to blog everyday in 2013. So that means at least 365 new posts, but hopefully a lot more.

There’s plenty of things happening in my world and the world to fill these entries, but thankfully it’s also the things not happening that will make this easier! The family is healthy and well, and while there will still be regular check-ups for Will, there shouldn’t be anything significant to worry about.

And I don’t think it’s really a coincidence that when I last put a big focus on my blog (in 2008-2009) it was my best writing period in years too. So that’s part of the plan 🙂

There are practical changes at home too: Ben has been moved to Lachie’s room to share now, so that’s two boys to each room, and the parents have their own room finally again! And with my best desk space there (as well as my PS3 but that’s a different story!) it will be better to write there. Later at night too I suspect, at least for now (and isn’t that an entry by itself… The best time of the day to write…)

Bring on a very new year 🙂 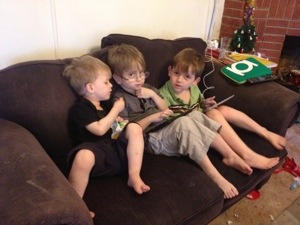 Three of the boys with their new toys… For fun, learning, communicating and the future!

Published in business and writing