Asylum seekers: Why should I be afraid exactly? 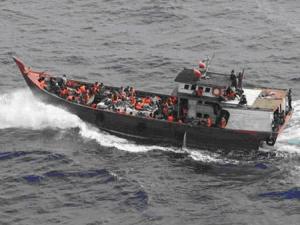 It’s “fear the asylum seekers” time, as the screwy situations in the world lead to an influx of displaced people, and half of Australia rears its ugly and paranoid head again in fear of the other. The government is behaving reasonably well in the situation though, about as well as you could realistically hope for, while the Opposition is behaving exactly as pathetically xenophobic and politically opportunistic as you could believe.

Is the situation really hard to understand? Sure, people smuggling is not a good thing, for a whole host of reasons. It’s extremely exploitative and dangerous for the desperate people being smuggled, first and foremost. But asylum seekers are not the enemy, and never have been. They are scared, desperate people who will do anything to escape their previous situation.

Basically all current asylum seekers in our part of the world are from Sri Lanka, people from the Tamil minority, who’s half of the country was completely devastated earlier this year. Leaving the “who’s to blame?” for that to other arguments, it’s not at all surprising there have been many Tamils fleeing. And terribly obviously, it’s a local conflict that barely made a dent in the local media (both because the government there did minimise the reporting on it, but also because local media didn’t care enough), so too many people now have no idea why there would be so many people fleeing.

And so we have the local reaction. The Labor government is caught in the “must be tough” situation, like all governments here, with an electoral majority equal parts ignorant and intolerant of how these situations come about, but they’re going about it reasonably well: they’re not demonising the asylum seekers, they’re treating them humanely, and they’re doing it in conjunction with neighbours like Indonesia. Sure I’d like to see more compassion, but any party in power will only go so far in this country.

But the Opposition… my goodness. It’s almost too obvious, watching Turnbull’s desperate and pathetic lunge for old Howard policies, simultaneously trying to scare everyone with xenophobia while declaring it’s all Kevin Rudd’s fault somehow. Like he could have stopped the Sri Lankan civil war. I had a slight amount of respect for Turnbull recently, watching him battle the extreme idiots in his own party, trying to get some kind of engagement on climate change, instead of writing themselves into irrelevance with more old Howard obstructionism.

That’s out the window now as Turnbull desperate grabs for the racist idiot vote. Give it up Malcolm, Johnny Howard did it so much better than you, and it won’t work from Opposition anyway. The difference between the parties couldn’t be more stark again: the pragmatic and reasonably good versus the xenophobic and dated.

And remember, the asylum seekers are not the enemy here. They are the exploited, the threatened. The fact they desperately want to come here says something good about us. I wonder if they’re faith is justified of course, but it is what it is. What we really need to do of course is as much as possible to address refugee problems in countries like Sri Lanka before it becomes the serious problem we see now. Tamil refugees are everywhere now (dozens were found on a cargo ship heading for Canada recently).

We should be working there to help resettle people orderly as required, not lock them out. Australia takes its share, as will other countries. Then we freeze out the people smugglers and help the asylum seekers. That’s how you fix the problem.