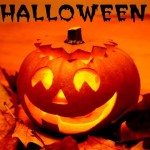 For many years now, we’ve always made ourselves slightly prepared for Halloween, not that keeping some chocolate in the fridge is hard for us or anything… but we’ve kept it in mind.

And every year previously, we’ve just eaten it ourselves a week later, none the wiser.

Must be the neighbourhood, but just before 5pm we had some little trick or treaters door knock us, then about 6pm a few more. That was it, but the 4-5 kids it represented were up on the 0 that had ever knocked before. So I think we can say that Halloween has arrived in Australia finally.

I don’t mind really, and I don’t think it heralds some disaster of American cultural imperialism or anything… I just wondered when we’d finally see more of it. And this year we did.

Makes me wonder if years down the track I’ll be taking Will, Alex and Lachlan out trick or treating…