Sorry world, we’re not all as lame as Hey Hey It’s Saturday 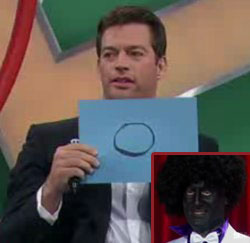 What else can you say really. It’s all over the news today, even though I had no intention of watching it myself, so everyone is now talking about whether a sketch with men in blackface pretending to be the Jackson Five was lame, stupid, racist or all of the above.

I’ll go for all of the above really, and it truly is an embarrassment to imagine the minds at Channel Nine that didn’t fortell anyone would find this offensive. And I can’t believe it took Harry Connick Jr to let them know this.

Look, let’s be honest… I’m sure the people doing the sketch meant no racist intent. But that’s not the point. Of course this sort of crap is racist… there’s a long history of ridiculing African-descended people with this kind of rubbish. Whether it was meant as racist or not is beside the point. It just is.

This has to be one of those “Australia in a bubble” kind of things… and I can’t believe there are still people trying to defend it. That’s the worst part: that there isn’t just a 100% “yes, this was racist and stupid, sorry,” response to this situation. And the international web reaction is sad, for us, because it’s another round of “aren’t those Australians backward” stories.

Of course, this is another feather in the cap of the pathetic nostalgia that the Hey Hey It’s Saturday reunions represent. The young people especially — I had nil desire to watch this — but apparently plenty of people my age did.

Published in news, politics and rant