Review: “Up” and away with more Pixar magic 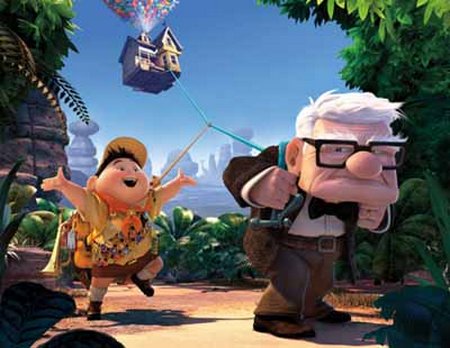 Pixar are magicians. That’s all I can say. Their latest effort, Up, is a wonderfully made, simple but deep fantasy adventure, that gives adults and kids equal amounts of enjoyment. It’s not a matter of it being a movie of “general” appeal, Up is truly for all ages, with multiple levels of enjoyment to be had depending on your age.

It’s a deceptively simple story really: a widower named Carl decides to take one last trip inspired by his and his wife’s dreams of adventure. A 10-year-old Wilderness Scout tags along by accident, and they have a whole lot of adventures. But there’s so much more to it than that.

First things first: The balloon house is just amazing. Really, it’s something that is actually inherently unbelievable, but it draws you in immediately. You believe that Carl can get the balloons required to lift his little house away, because there’s no reason not to believe. It’s a magnificent visual image, and a visual metaphor for lifting up out of the ordinary world into adventure.

Emotionally, the first 10 minutes are really tough, as we see Carl as a child meet his future love, and then their whole life together is compacted into the movie’s opening. It’s beautiful, but sad as well, as we see the triumphs and tragedies of their life together — sad especially since we know where things are going. And when we see Carl alone and his wife gone, it’s probably the most emotional moment Pixar has ever put on film.

But then the fun begins. Carl’s a grump (though not nearly as much as the promos would have you believe), but Russell the Wilderness Scout is an eager little adventurer, a perfect counterpoint to Carl, and an insightful character in his own right (when he talks about memories of time with his now absent father, that’s as emotional as Carl’s life story). It reaches the audience at every level, with a sympathetic old character and a sympathetic young one — most movies can’t even get one side right and Pixar gets both right.

The adventure hits many high points, with a compact but very visual story, and a lot of excellent moments for the adult and child audience. The “squirrel!” gag is a good one, and there’s at least one big Star Wars gag. The dogs are an odd set of characters, but it’s a good way to give the bad guy a set of henchmen without actually including any people! The way the dogs talk is particularly amusing.

From the kids point of view: Unsurprisingly, Will loved it. He’s the world’s biggest Pixar fan, so I don’t think they could have done anything he would dislike, but I couldn’t fault it either for his enjoyment. You can’t go wrong taking your kids to this movie, and you’ll find enough to enjoy yourself.

So almost immediately after Up, we’re ready for the next Pixar adventure. It might be Toy Story 3, but I strongly imagine we’ll be up for the Toy Story 1 and 2 re-releases before that. And Will and I have already decided that his younger brother Alex will see Toy Story 3 with us (Alex has not been to the movies yet), so this yearly family pilgrimage is about to get bigger.

At least until Pixar starts bringing out two movies a year, of course…